Review - To Kill a Kingdom by: Alexandra Christo 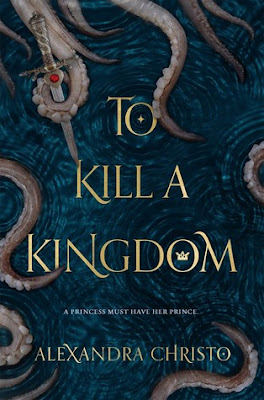 Princess Lira is siren royalty and the most lethal of them all. With the hearts of seventeen princes in her collection, she is revered across the sea. Until a twist of fate forces her to kill one of her own. To punish her daughter, the Sea Queen transforms Lira into the one thing they loathe most—a human. Robbed of her song, Lira has until the winter solstice to deliver Prince Elian’s heart to the Sea Queen or remain a human forever.

The ocean is the only place Prince Elian calls home, even though he is heir to the most powerful kingdom in the world. Hunting sirens is more than an unsavory hobby—it’s his calling. When he rescues a drowning woman in the ocean, she’s more than what she appears. She promises to help him find the key to destroying all of sirenkind for good—But can he trust her? And just how many deals will Elian have to barter to eliminate mankind’s greatest enemy?

This is not the little mermaid. This story is nowhere near the beautiful creatures we all believe that if we spend too much time in the ocean we could meet one. This story is especially not romantic in any sense of the meaning. To Kill A Kingdom is absolutely harsh, adventurous, and painstakingly gorgeous all in one.

I have to admit, it took me about a 1/3 of the way through the book to be absolutely hooked. However, once I got there, there was no stopping me. I read 70% of the book in 24 hours. I lived for Lira and Elian’s story and couldn’t help but keep hoping for a perfect ending.

To Kill A Kingdom is told in alternating view points between Lira and Elian. At first I didn’t realize that because there was no indication on the pages, however it became very obvious. The first thing you learn in this book is how harsh of a world these two live in, especially Lira. Lira is the heir to the Sea Kingdom, a harsh world where sirens steal human hearts. On top of that her mother is Ursula, the mer-people from Harry Potter, and a complete tyrant all in one. There were parts in the beginning of her story that had me completely cringing at the harshness.

On the other side we have Prince Elian who is the golden boy with no desire to rule and all the drive to explore the world. He made it his life-long threat to kill the sirens that so murderously destroy human-kind. You quickly learn that Elian really does have a heart of gold and wants the best for his crew and people.

When Lira and Elian meet, my world sped up with them. I couldn’t help being completely entranced with the two and their journey. I adored exploring the different kingdoms and lore along the way.Overall this book was a fabulous stand-a-lone and I loved it.