Review - The Affiliate by: K.A. Linde 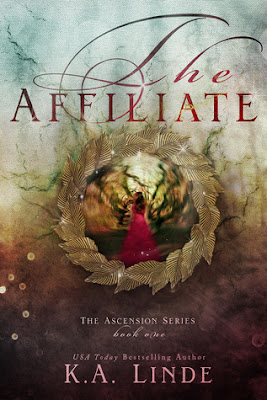 On the day of her Presenting, in front of the entire Byern Court, seventeen-year-old Cyrene Strohm's lifelong plans come to fruition when she's chosen for one of the most prestigious positions in her homeland—an Affiliate to the Queen.

Or so she thinks.

When Cyrene receives a mysterious letter and an unreadable book, she finds nothing is as it seems. Thrust into a world of dangerous political intrigue and deadly magic, Cyrene's position only grows more treacherous when she finds herself drawn to the one man she can never have...

Cyrene must decide if love is truly worth the price of freedom. Find out in this first book in USA Today bestselling author K.A. Linde’s new Ascension series.

After seeing an amazing recommendation for The Affiliate, I just knew I had to pick it up. Between the secrets, tension, and beautiful world building, this book was every bit as magical as I expected it to be.

Cyrene, gorgeous name by the way, is our protagonist. I hate to reference other books, but it's very "The Selection" in the very beginning but as it continues it turns almost into a romantic mystery. You're constantly trying to figure things out as Cyrene does, and pull your hair with emotions while she does. Other than Cyrene we have a pretty big cast of characters and sometimes the book actually switches to their viewpoint, which was fantastic to see. With our two main fellas, Edric and Kael, I feel as if there's a lot of severest we still need to uncover and I'll be curious to see what they may be.

The ending of the story was not really a cliffhanger, which is great because so many stories nowadays end that way. However, I wanted more. It was definitely a "to be continued" ending and it did leave me wanting the next book as soon as possible, but I believe I was looking for a more dramatic ending than I got. That being said, I still loved this story and adored following Cyrene through her adventure. I am definitely hoping we finally get to dive more into the magic aspect in the next book. Cannot wait to pick up The Bound.