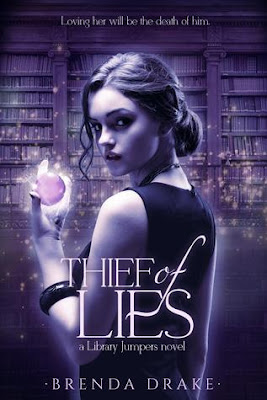 Gia Kearns would rather fight with boys than kiss them. That is, until Arik, a leather clad hottie in the Boston Athenaeum, suddenly disappears. While examining the book of world libraries he abandoned, Gia unwittingly speaks the key that sucks her and her friends into a photograph and transports them into a Paris library, where Arik and his Sentinels—magical knights charged with protecting humans from the creatures traveling across the gateway books—rescue them from a demonic hound.

Jumping into some of the world's most beautiful libraries would be a dream come true for Gia, if she weren’t busy resisting her heart or dodging an exiled wizard seeking revenge on both the Mystik and human worlds. Add a French flirt obsessed with Arik and a fling with a young wizard, and Gia must choose between her heart and her head, between Arik's world and her own, before both are destroyed.


This book is every book readers fantasy dream. I mean, transporting to places in the world through books...if that isn't something we all wish existed, I don't know what is. Thief of Lies is that story that takes you on a journey of self-discovery, magic, and secrets that you have to uncover at every turn.

We get a huge cast of characters in Thief of Lies. There are witches, wizards, sentinels, humans, and lots of other members to complete this story. Gia, our protagonist, was really fun to follow; I always love watching a character grow into everything they're meant to be. If I had to pick a favorite character though, it would actually probably be Nick or Afton who are Gia's best friends. They're the perfect best friends in every way and handle every turn with grace and strength.

With the romance aspect, and this horrible to say considering we all wish guys were more sentimental, but I thought Arik was just a little too gushy. Don't get me wrong, I completely love everything he stands for and right now I definitely ship Arik but something about the chemistry just didn't work for me personally. That being said, I believe we're going to see a love triangle in future books...we shall see what happens!

Staying on that note, I have to admit I was a little disappointed with the ending. The book felt like it built, and built, and then just flat-lined. It's not that I thought it was poorly done or anything like that, I just wanted more that I suppose I did not get.

Overall though, I thought Brenda Drake did a really great job of weaving magic, fantasy elements, and the book jumping all together into one. I really like how everything worked together to make one really exciting story line to read. The whole magic globes part really intrigued me and I will be excited to see where the next book in the series leads to!