Review - Out Of Control by: Victoria Green and Jinsey Reese 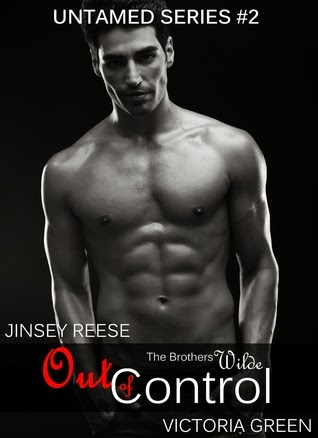 But she’s not the same girl anymore. Now, at twenty-two, Reagan has big plans to change her life, and it all starts with a trip to Europe. Instead of heading into Harvard Law like her parents had planned, she’s crossed the ocean to follow her dreams in the art world. Her dreams. For once. A chance
meeting in Paris brings Reagan and Dare face-to-face again, but is it serendipity...or penance? A chasm of unspoken hurt stands between them, but they can’t fight the passion they have for each other. And now that she’s found Dare again—the one person in this world who makes her feel whole—she doesn’t want to let go. Problem is, she may not have a choice.

Oh this book is Out Of Control alright...it's heart hurting heaven! Be prepared, I'm going to rant my little face off in this review. Out of Control was amazing, and I literally read the whole book in a few hours. At the same time though, it was a roller coaster, bumper cars, and a tilt-a-whirl all in one.

I wanted to smack Dare so many times and then turn around a squeeze him for his cute moments. There was even a moment I literally talked at my phone that he needed to get it through his thick skull that Reagan loves him! I know he's hurt...but come on man! On a lighter note, he's still pretty dang artsy and protective and sexy, oh yeah.

Then, poor Reagan, she's finally on her own, doing her own thing, and getting her life back the way she wants it to only have it ripped apart at every turn. I mean Lucien, her parents, Archer, and even Dare...this girl can never catch a break. She's literally trying so hard to fight for everything she wants only to have it blow up in her face every time and I really honestly feel for her. I hope for much happier things in her future.

I cannot believe with these first two novellas how much my emotions hurts...and I gotta get through four more for a (hopefully) happily ever after ending for these two, oh bless my poor heart. Speaking on the feeling bad, I felt bad for my boy Archer because I think he truly has feelings for Reagan and ends up getting thrown into her drama, too. Don't worry Archer, I got you, love HA!

See, I told you I was going to rant a lot, but let me tell you...these books are absolutely amazing. They're eventful and sexy and filled with betrayal and hurt and steamy moments. I couldn't have loved it more.