Out From Under You by: Sophie Swift 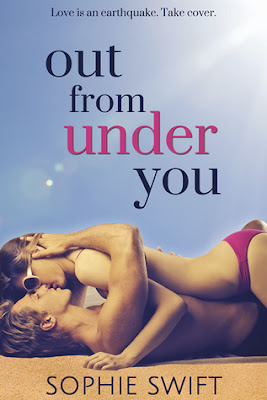 Synopsis: The day Lia Smart met Grayson Walker, eight years ago, was the day she fell helplessly in love with him. Coincidentally, it was the same day Grayson fell in love with someone else: Lia’s smarter, sexier, superior-in-every-way older sister, Alex.

Now, nearly a decade later, Alex and Grayson are long over and twenty-two-year-old Lia has finally managed to forget all those lonely nights she spent pining after her sister’s boyfriend. But when Grayson unexpectedly arrives back in town with Alex for Labor Day weekend and the two announce that they’re not only back together but engaged, all the feelings that Lia buried suddenly come bubbling back to the surface.

But Lia is no longer the awkward, gangly tomboy she was at fourteen. Far from it. And Grayson is conflicted by the lustful thoughts he’s now having for her. He knows he could never act on those thoughts, however. Grayson has always prided himself on being one of the “good guys.” But as the weekend wears on, he’s finding this new grown-up version of Lia more and more impossible to resist...

Heartbreaking and sexy with a dash of humor, Sophie Swift crafts a passionate, unforgettable tale about desire, growing up, and the kind of love that shakes us to the core.

"Love is an earthquake. It comes when you least expect it. It shakes your foundation to the core. It rips the ground clear away. Right out from under you."


This was definitely one those new adult books that I just knew form the synopsis I wouldn't be able to put it down. That there would be drama, betrayal, and lots of steamy scenes... and I was right. Out From Under You is filled with so much tension, super sexy scenes, and a whirlwind of issues that keeps you hanging on until the very end.

I absolutely loved Lia from from the start. She definitely was independent and I adored her snarky attitude. Lia wouldn't be taking any bullish*t from anyone. Watching her sister, Alex, and her relationship was definitely rocky and made me feel for her. I can't imagine how it would feel to always be just outside of someone's spotlight. To have a sister who is essentially perfect, while you're everything completely opposite. On the other side of her was Grayson... hello hottie! I really did like Grayson. He has a great personality and "hero" aspect. Despite everything that goes on in the book, I just couldn't help but love him.

There were a lot of moments in this book where I wanted to kick these two ( Lia and Grayson). Yes, Alex is - to say the least - a witch with a "b"... but does it make it right what Lia and Grayson do? I'm not sure... it really made me look at my own morals and wonder. Regardless of how "bad" they were I still rooted for them. Lia and Grayson definitely made my emotions go all over the place in this book and they definitely were heating up the pages.

Overall, I really liked this book and was impressed with the tidal wave of emotions I was feeling. It's more than just a love story and a vicious sister relationship though. I loved watching Lia and Grayson essentially figure out who they were in the process and it makes the ride so much more worth it. If you're thinking of picking this book up... I say defiantly give it a try!