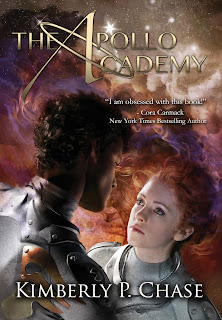 Synopsis: As the heiress to Titon Technologies, eighteen-year-old Aurora Titon can have whatever she wants—clothes, expensive gadgets, anything money can buy. All she really wants is to escape her pampered, paparazzi-prone life for the stars. Becoming the first female pilot to train as an astronaut for the Apollo Academy is exactly the chance for which she has been waiting. Everything would be perfect if it weren't for her unreciprocated crush on a fellow student, the sexy astronaut bent on making her life hell, and the fact that someone keeps trying to kill her.

The first in a four book new adult science fiction series, The Apollo Academy, is an action packed story of love, discovery, and survival.

Thoughts: Let me just start off by saying that I absolutely, completely LOVED this book. I don't exactly remember how I got involved in this book tour, but I'm one of those bloggers who actually reads and looks at every offer I get. I take chances on indie books and books from non-huge publishers and I am SO glad I took a chance on The Apollo Academy. The Apollo Academy is everything a new adult book should be. It's thrilling, filled with drama, and completely sci-fi-tastic!

Aurora Titon is famous. She's Collin Titon's daughter, which means she's the hieress to the famous Titon Technologies. Everyone knows her face, but Aurora could care less. She doesn't want the attention or the fame or the company. All she wants to do fly and get into the Apollo Academy. Aurora gets her dream come true and her best friend Kaylana, plus two sexy guys, Zane and Sky are by her side every step of the way. Quickly after she arrives, the academy starts to deal with issues that Aurora could have never imagined. Everyone has secrets and unfortunately Aurora is in the middle of it all and she'll have to figure it out fast or it could mean her life.

Let me first start off by saying that this book switches view points which I absolutely love in a book. At first it starts out with just Aurora and Zane, but then Kimberly Chase throws in Sky's POV as well and I was like heck yeah! The writing was very well done, and I loved every twist and turn. I really liked Aurora as a main character as well. She definitely grows throughout the book into a stronger person and I love seeing that. I also loved how Kimberly P. Chase mixed new adult in with romance, drama, and a good sci-fi. Looking at all the futuristic technology and flying aspect was definitely awesome.

So lets get to the part everyone wants to hear about... the fellas. You know a book is always that good when you can't pick one boy over the other. Lets start off with Zane. Zane is nineteen and an unknown, which means technically he doesn't have an identity and unknowns normally are not good people. Zane is a tech-wiz though. He's super smart and with his ink black hair and gray eyes... super sexy as well. Zane fights hard to get into the academy to finally fight for a life he deserves. I loved this boy as soon as I met him! Than, on the other side is Sky. Sky is the academy's twenty-two year old star pilot and he's been selected to help train the new cadets. At first Sky comes off as the cocky jerk off, and he definitely has it out for Aurora. Sky has the build, blonde hair blue eyes all-american thing going on for him. I admit first, I was like okay this guy is a jerk but I knew there had to be a reason and as the book went on, I ended up falling for him too. In the beginning of The Apollo Academy, I was all team Zane but then as I got farther in I started to lean towards Sky and then back at the end I just couldn't choose again. As of right now, I absolutely ADORE both boys. I personally think Aurora belong with Zane, but for me I'm currently leaning towards Team Sky. Both boys sacrifice and do a lot for Aurora and you cannot help but love them both.

It's funny, because you really can't judge a book by it's publisher, cover, or even synopsis because I was so absolutely impressed with The Apollo Academy. I read the synopsis to this book and it interested me, but I never thought that I would get so captivated and caught up in it as I did... then again, I am definitely a sic-fi, new adult type of girl. But, I absolutely loved this book. It's definitely made it's way onto my favorites lists and I cannot wait for book two which is hopefully releasing early next year. If you think this book sounds interesting at all, I say definitely take a chance on it because I loved it.