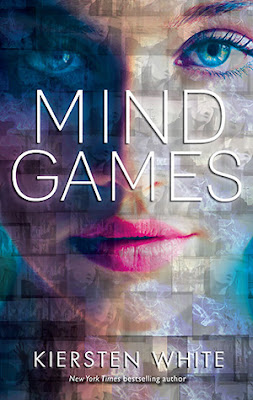 Synopsis: Fia was born with flawless instincts. Her first impulse, her gut feeling, is always exactly right. Her sister, Annie, is blind to the world around her—except when her mind is gripped by strange visions of the future.

Trapped in a school that uses girls with extraordinary powers as tools for corporate espionage, Annie and Fia are forced to choose over and over between using their abilities in twisted, unthinkable ways… or risking each other’s lives by refusing to obey.

Thoughts: A perfect mixture of thrills, intense moments, and torture. This is not a light book by any means. This is not just some powerful set of a girls with romance and smiles. It's manipulative and thrilling and you will constantly be guessing who you can trust.

The first thing that caught my eye was the fact that it is told from the view points of two sisters. I thought it was quite interesting and I honestly expected to be one of those "oh my gosh it's one person" type of things... but I was so very wrong. Fia and Annie fight for each other. They are each other's strength in a very screwed up situation... a very dangerous situation. It's funny because I found myself constantly going back and forth between the two sometimes seeing similarities and other times wondering how one is so reserved and the other is so crazy. The book definitely makes you think. Think whether one of the them was set up, whether one really betrayed the other, whether one really is crazy... so many questions. The book literally does play mind games with you while following these two lovely sisters.

Kirsten White's romance always seems to be different from most books I read, at least to me and this one is no different. Her woman are strong... they don't just "fall in love". First, there's James. James who is under constant restriction by his father. A puppet... or so it seems. He just plays a role and yet somehow I love his daddy issues. He's just as manipulative as he is caring... yet I find myself still loving him. James reminds me of Warner from "Shatter Me". Handsome, powerful, tortured, and yet so incredibly strong. You never know quite what is lurking behind his dangerous  flirtatious smiles. Then there's Adam. Adam who is innocent from the beginning. With gray eyes and a sweet side, he has no idea what he's happened to fall into. Though we don't see Adam as much as I would have liked... I found myself really liking him. Though while I say that, I think this is where I may get hit from the blogsphere... but I like James more.

This book really screwed with my brain cells. Once I finished I had to sit there and think things through and back track. The only thing about the book was that I felt it was extremely thrilling whole time yet at the end when I expected something huge... I felt like I didn't get it. Don't get me wrong, the ending is killer and was very unexpected, I just felt as if I needed more "oh my" factor. There are also a lot of questions I have and I cannot for book two so that some of the tortured thoughts can be releases from my brain. Overall, I think Kiersten hit this one out of the park with its originality and constant thrills. I absolutely loved it.