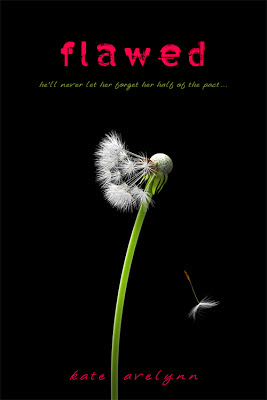 About FLAWED: Sarah O’Brien is alive because of the pact she and her brother made twelve years ago—James will protect her from their violent father if she promises to never leave him. For years, she’s watched James destroy his life to save hers. If all he asks for in return is her affection, she’ll give it freely.

Until, with a tiny kiss and a broken mind, he asks for more than she can give.

Sam Donavon has been James’s best friend—and the boy Sarah’s had a crush on—for as long as she can remember. As their forbidden relationship deepens, Sarah knows she’s in trouble. Quiet, serious Sam has decided he’s going to save her. Neither of them realize James is far more unstable than her father ever was, or that he’s not about to let Sarah forget her half of the pact…


My review of this amazing book!

About the Author:
Kate Avelynn lives in Central Oregon with her husband, whom she fell in love with at eighteen after realizing he shared her obsession with music, sports, and psychoanalysis. When not devouring books, holding down her editing gig, or attempting to coax life out of the weed patch she calls a “garden,” Kate writes dark, young adult romance that blends first love, betrayal, and danger. FLAWED is her debut novel.

- Hiiii Kate!!! :) happy to have my ROCKSTAR back on my blog again! How are ya?
I’m doing very well, thank you for asking! And thank you again for hosting me back on the Rockstar tour. You get me and I love that about you!

- Of course I get you! Dark Darlings forever! ...So Flawed (brilliant btw!) did you ever know any one like James or Sarah in your life?
Not really, no. With very rare exception, the characters in all of my books are figments of my imagination. As E.L. Doctorow once said, “Writing is a socially acceptable form of schizophrenia.”

- Oh! I like that quote!! What was your inspirations to write such a dark and emotional book?
I’ve always been fascinated by why people do the things they do, and think what they think. When I was a kid, one of my favorite games was listening for breaks in conversations, then trying to figure out how the person got from the last thing they said to the new topic. What could they have been thinking about that led them from point A (Starbucks makes the best frappucinos!) to point B (Hey, want to go see the new Ryan Gosling movie?). That kind of thing.

I’ve also always needed to understand abuse—specifically what leads someone to abuse someone else, how they justify what they’re doing, and how the person who loves you most has the potential to be the most toxic individual in your life. When the image of James hovering in the shadows watching Sarah popped into my head, I immediately knew what kind of book I had on my hands. It was the look in his eyes—the innocence, of all things—that inspired FLAWED.

- Favorite season? Why?
I’m a summer girl. It’s easier to cool off (jump into a pool, sit in front of a fan, drink ice cold applesauce from a glass…) than it is to warm up. Plus, I LOVE the beach.

- If you could go anywhere in the whole universe where would you go?
I don’t like to travel because traveling itself drives me nuts, but the second teleportation exists, I’m headed straight for somewhere with castles and ancient ruins. I’ve lived my whole life in a part of the country that doesn’t have much old stuff, so I feel like I’m missing out on a ton of history!

- If you could be any Disney princess which one would you be? Why?
This is a hard question! I’ve always had a soft spot for Cinderella’s story, but not Cinderella herself. So I think I’d want to be Ariel. Mostly because of the beach thing, her kickass singing voice, and because she’s always trying to learn stuff, but also because every boy I’ve met has been infatuated with her.

- So, um, how's Alex's project coming along? ;) Or any other projects you're working on?
The rumors are true! I’m working on a companion book to FLAWED that I’m calling BETRAYED, featuring Alex (James and Sam’s best friend) and Ashley Granger, a girl who has ties to what happened in book one—she just doesn’t know it yet. If you’ve read the book you’ll probably recognize her last name and guess the connection!

Lightning round!
- Favorite color? BLUE
- Coffee or Tea? Neither, but I’ll take a bottle of water or some orange juice, please!
- Paranormal or Contemporary? Contemporary.
- Binder clips or Sharpies? (BAHAH! I had to)  Hypothetically speaking (because no way would anyone dare rob me of one or the other in real life!), I think binder clips would be more useful in the zombie apocalypse. So (again, hypothetically), I might be convinced to part with the Sharpies. Maybe.
- Eyes or Lips? Lips. But this is only because I’ve kissed enough boys with pretty eyes to know that they’d better have a nice set of lips if there’s going to be anything long term between us!

- Anything else you'd like to let us know?
I’ve been asked to write a sequel to FLAWED that shows Sarah off at college, dealing with the aftermath of what happened, finding love again, becoming her own person. I’m undecided. I’d love to hear what you guys think of the idea. Could you handle seeing Sarah move on? Or do you prefer to leave her story where it is, with any updates happening in Alex’s book?

- Personally, I actually am against a sequel. NOT that I wouldn't read it if there happened to be one. Even though it was tragic, I'm just happy where Sarah ended up and I honestly don't think I could handle seeing her moving on. But, I like the idea of her appearing in Alex's book!

- THANK YOU SOOOOO MUCH Kate for stopping by. I love ya! You're welcome here any time!

And now for the prizes! Kate is giving away a FLAWED swag pack (dog tag, tattoos, guitar pick, magnets) and a $5 iTunes gift card to one lucky commenter. All you have to do is leave a comment answering the question about a FLAWED sequel I posed above, along with your email address. Today’s giveaway is only open to US residents, but keep an eye out for International giveaways scheduled throughout the tour.

Kate is also running an Ultimate FLAWED Fan Pack contest via the Rafflecopter listing below. Enter daily for a chance to win some really cool stuff!