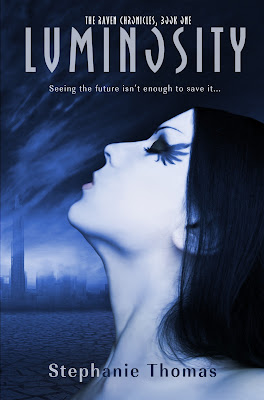 Synopsis: My name is Beatrice. When I was born, I was blessed with the Sight. I was immediately removed from my parents and enrolled in the Institution. At the age of twelve, I had my first true vision, earning my raven’s wings. And when I turned seventeen, one of my visions came true. Things haven’t been the same since.

The Institution depends on me to keep the City safe from our enemy, the Dreamcatchers, but I’m finding it harder to do while keeping a secret from everyone, including my best friend Gabe. It is a secret that could put us all in danger. A secret that could kill me and everyone close to me.


Thoughts: Dark. Unknowing. Trained killers and it's a kill or be killed world. Luminosity literally sucked me into its darkness right from the first line. It has such a vivid opening that instantly pulls you into this terrifying story and I loved every dark and twisted moment of it.

In the City, Seers are the royalty. They see the future and protect the citizens. Seer Beatrice is one of the most famous of all, she had her first vision at a very young age and now hers are the clearest of all except for their leader, The Keeper, of course. The problem though... Bea's visions are freighting and not good news for the City. They all lead to one thing: the attack of Dreamcatchers. Dreamcatchers are their enemy and can kill quickly and easily. Then, a Dreamcatcher named Echo starts haunting Bea's dreams and she comes to find that they just may be real. The Dreamcatchers are closing in on the City, citizens and seers are dying... will Bea and her peers be able to help save the City or will she betray them all?

Showing heart and caring for humanity is completely different from weakness. Beatrice has the quality of heart, of following her own instincts to do what is right. She never once is weak. She fights for those she loves and she fights in the right ways, not just blindly killing. I adored her fierceness and the trust she places in herself. Plus, she has a sexy best friend who is so physically strong, I love his slight cockiness, and they way he always seems to be looking out for Bea. On the other side of the love interests is Echo. So far, I definitely like what I see, but not even to be team Echo. As of now, I'm team Gabe all the way!! The story isn't all strong, fighting characters though. There are those like Brandon and Elan who I ended up loving for just being themselves. And, finally Mae who is the character who always finds that bright spot in everything. Just one of the characters you cannot help but love.

This whole story is a twisted war, that I don't think we've even began to dive into. There is so much more I want to know about each the Seers and Dreamcatchers and I love the idea of tattoos next to the eyes! I also have a theory about Bea that could be way off... but hey you never know! There are definitely intense fight scenes and vivid imaginary that I just absolutely fell in love with. These types of books are always all up my alley. Dark and intense with some romance and a brilliant concept... those types of books always tend to blow me away. Luminosity is one of those books.