Hosted by: Once Upon a Twilight 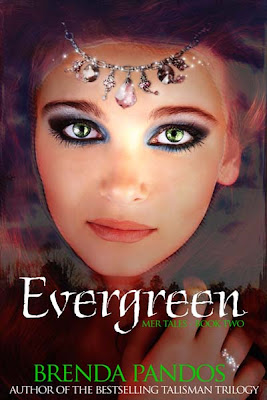 Synopsis: A kingdom on the brink of war.
A king on the fringes of insanity.
A family running for their lives.

Ash and Fin’s only desire is to be together and dive into their happily ever after, though their conflicting worlds work to pull them apart. Neither is ready to convert to the other’s life: become a human or a mer. Little do they know that somewhere in Natatoria a secret holds the fine fabric of everyone’s lives together. If the truth is discovered, Ash and Fin will no longer have the luxury of waiting. They’ll be forced to choose. But will it be for loyalty or love? Or will someone else make the choice for them if they can’t decide?

Enter the watery world of treachery, greed, and the binding mer kiss as the story continues with Evergreen, book two of Mer Tales. 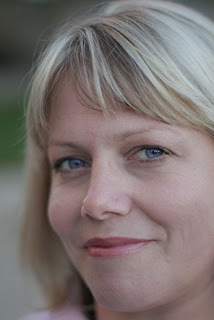 Brenda Pandos lives in California with her husband and two boys. She attempts to balance her busy life filled with writing, being a mother and wife, and spending time with friends and family. Working formerly as an I.T. Administrator, she never believed her imagination would be put to good use. After her son was diagnosed with an autism spectrum disorder her life completely changed. Writing paranormal romance became something she could do at home while tending to the new needs of her family, household, and herself.

Three years later, Brenda now has five books published, The Talisman Trilogy: The Emerald Talisman, The Sapphire Talisman, and The Onyx Talisman, and Mer Tales: Everblue and Evergreen. She is currently working on the third book of Mer Tales, Everlost, coming February 2013.

1) Do you like writing Fin or Ash's POV better? Do you connect with one of them more than the other?

I try to balance each couple in my stories by giving them opposite personalities. The more I wrote, the more Fin became the fun, dominate, head-strong force of Everblue, and Ash became lost, alone, frustrated, and unsure, which made her more difficult to work with. In Evergreen, they both came into their own and dealt with their own problems differently. I think I appreciated Ash more in some ways than Fin as he faltered and didn’t use his typical dominate side to help himself. I guess I resonate with the one who chooses their destiny and doesn’t let anything or anyone stand in their way. But we all need to grow, so…

2) Have you always wanted to be a writer?

No. I didn’t realize I enjoyed writing until about five years ago when I started The Emerald Talisman and needed an escape during a hard time in my life. It’s been fun and a lot of hard work, but my Cinderella story in how I became a permanent stay-at-home mom.

The deep blue sea freaks me out, actually! But, alas… I’m in love with mermaids. Splash was what did me in as a young girl. I was a swimmer and water-lover in general and even sewed my own mermaid tail out of an old night gown. But honestly, I’m terrified of sharks and water creatures and I don’t swim alone, even in a pool.

SS: REALLY?! Oh gosh I love the ocean. And I adore swimming alone.

4) If you had to pick an actor for Fin and an actress for Ash who would you pick?

Ugh… that’s hard. (stops… opens Google) Okay. I don’t know necessarily based on acting, but Austin Butler is adorable with his blond hair and blue eyes. Couldn’t you see him in a black baseball cap in a Red Tahoe? And I think Bonnie Wright or Bryce Howard would be great for Ash.

I feel so out of touch. Ahhhh… Avatar. No, I haven’t delved into that, but my most recent TV watching obsession was The Forsyth Saga while I worked on a cross stitch project (an after book release reward). So good. For food, most def chocolate. Okay, and chai soy latte’s from Starbux. Also Word with Friends, though that’s becoming a bit hard to play ‘cause I hate to lose and I take a long time to make my move because of it. Yeah… there’s always a game that’s soaking up my dead brain time since I haven’t much time for TV, reading, or anything else with my 4 and 6 year old boys.

6) Have any sekrit projects you're working on or upcoming books we don't know about?

Beyond Everlost? *coughs and looks up* I just listened to the final version of The Emerald Talisman as an audio book (squee) and… it got my wheels spinning. It wasn’t that I wanted to quit writing about them, I just didn’t have anything compelling me to continue with their story… until now. I might have something new with Julia, Nicholas, Phil and the gang coming out late next year. You’re the first publically to know. And there’s something else bothering me … something new … something dystopian (like Mer Tales doesn’t cross into that realm a little…haha). The tag line is “What if you knew the date you’d die?”

I love trance music and if I can get a feeling in a song, it really helps when writing (kind of like music does in a movie). Another Day on the Terrace (chill mix) by Sunlounger embodies the emotion of Evergreen. I heard it, got chills, and bought it on the spot (and listened to it a million times). It’s awesome!

8) Do you have a favorite read of this year so far?

Alas, I don’t have much to time devote to reading, but Power by Kristie Cook is coming out in a few days and I was a beta reader. It’s going to be an awesome and powerful addition to her Soul Savers Series!

SS: Haven't read that series yet! Wanted to check it out though!

9) Where'd you come up with the idea of tattoos as rings (I LOVE IT!)?

Oh… I don’t know. I love sparklie things, so … I think at the time I needed something permanent that showed evidence of the promise and the tattoo fit. And it’s rather adorbs on the cover, if I say so myself.

10) Anything else you'd like to let us readers know?

In every story, there’s a quirky odd ball that we all come to adore (Badger, Enigma, Harry, for example) Ferdinand, if you didn’t know, is an autistic merman in the story, though I don’t come out and label him that. Autism is the reason I’m a writer today. My son was diagnosed four years ago and it’s forever changed our lives. Through early detection, a casein/gluten free organic diet, and intense therapy, he’s in first grade with his typical peers (with very little direct support) and I couldn’t be prouder. But many never talk. They live in their own world, hampered by routine, and bombarded by life itself. I wanted to show a piece of that with Ferdinand, honoring the story Ferdinand the Bull. He’s the character I most connected with, actually. If you think maybe your child might not be developing on time, don’t wait. You can screen your child for free at http://www.autismspeaks.org . Check out ageofautism.com for truth in the epidemic.

But on the brighter side, to my fans: thanks for reading, reviewing, and following me. I appreciate all the emails, letters, presents, tweets, and facebook messages. This wasn’t something I anticipated when I started my journey as a writer and I’m more than thrilled I’ve found my niche and a great group of readers to share my stories with! Totally warms my heart and I consider you all friends, chatting with me at home in my virtual coffee shop! <3 font="font">

Thanks so much for the fun interview and the promotion of my work, Jena! I enjoy our friendship because of books! Hugs!

SS: Thank you Brenda for stopping by and answering all my questions! :) I waaaant to be a mermaid!
________