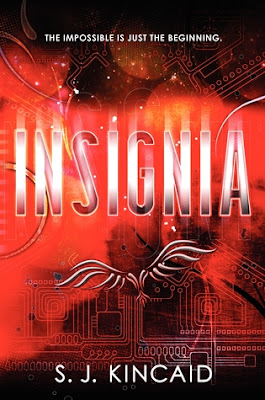 Synopsis: More than anything, Tom Raines wants to be important, though his shadowy life is anything but that. For years, Tom’s drifted from casino to casino with his unlucky gambler of a dad, gaming for their survival. Keeping a roof over their heads depends on a careful combination of skill, luck, con artistry, and staying invisible.

Then one day, Tom stops being invisible. Someone’s been watching his virtual-reality prowess, and he’s offered the incredible—a place at the Pentagonal Spire, an elite military academy. There, Tom’s instincts for combat will be put to the test, and if he passes, he’ll become a member of the Intrasolar Forces, helping to lead his country to victory in World War Three. Finally, he’ll be someone important: a superhuman war machine with the tech skills that every virtual-reality warrior dreams of. Life at the Spire holds everything that Tom’s always wanted—friends, the possibility of a girlfriend, and a life where his every action matters—but what will it cost him?

Gripping and provocative, S. J. Kincaid’s futuristic thrill ride of a debut crackles with memorable characters, tremendous wit, and a vision of the future that asks startling, timely questions about the melding of humanity and technology.


Thoughts: Insignia is such a refreshing and thrilling take on a futuristic story. It's stimulating and intoxicating. You'll literally want to jump right into the world and plug your brain in.

Tom Raines life is anything but easy. His mother left his family for some big wig, his father has gambled everything away, and Tom struggles to have a place to stay every night. That's where games come in. He's one the best gamers and he knows it. So he uses it to his advantage to keep him and his father afloat. Then, Tom is noticed by the military and asked to join. A military which is now fought by simulations and gamers in space. Tom sees it as a way to finally dig himself out of the rut he's in, a way to finally be somebody important... So he accepts the offer. He soon starts to find out the worlds secrets and that he may be more valuable then he could have ever imagined.

Once this book starts getting going, it really takes off. It's a futuristic book unlike any you've read about. Can you imagine a world war three where humans don't do the actual fighting, but rather human controlled devices on another planet do. To be able to plug yourself into a simulation with out consequences to your physical self and download anything you need to learn over night? All the thought processes for the computer systems, the simulations, the corporations that went into making this book was truly fascinating.

The character as well were unique in a sense that they weren't the typical characters we normally read about. Tom isn't handsome. He's geeky, scrawny, and has to fend for himself until he goes to the Pentagonal Spire that is. Then we watch him turn into his true potential. We see his skill, his defiance, his viciousness, and overall his talent turned into something brilliant. His friends are very diverse as well. Vik definitely brings comic relief to the story, where Wyatt is reserved but completely bad ass in her own way. Honestly, I'm hoping to see a lot more of Wyatt in the future, I really liked her character and the skills she brought to the table. Even Medusa caught my eye, and I enjoyed diving into her brain as Tom did.

There's a lot of characters in this book other than the few I've mentioned. Some you'll love and others you'll want to surely strangle at times. But, they're all apart of this extremely technological world and all have their own parts to the story.

Insignia is a longer book, but after the first one hundred pages I found myself devouring the rest of the book. It's so easy to get caught up in all the possibilities this book presents and all the struggles these characters are faced with. It's truly a fresh look on a virtual world. One that will have you laughing at times, awed in others, and overall just enjoying the thrills and twists of the book.