Welcome to my stop on the Entangled Publishing HUSHED Blog Tour! :) I loved this book so much! I even have an interview with Evan and Archer... come get inside their heads a little! 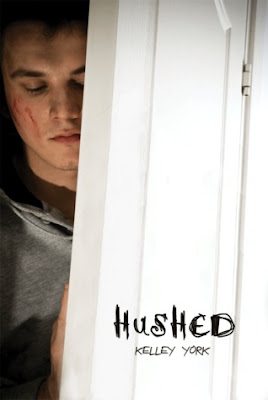 Eighteen-year-old Archer couldn’t protect his best friend, Vivian, from what happened when they were kids, so he’s never stopped trying to protect her from everything else. It doesn’t matter that Vivian only uses him when hopping from one toxic relationship to another—Archer is always there, waiting to be noticed.

Then along comes Evan, the only person who’s ever cared about Archer without a single string attached. The harder he falls for Evan, the more Archer sees Vivian for the manipulative hot-mess she really is.

But Viv has her hooks in deep, and when she finds out about the murders Archer’s committed and his relationship with Evan, she threatens to turn him in if she doesn’t get what she wants… And what she wants is Evan’s death, and for Archer to forfeit his last chance at redemption.

'Kelley York delivers in this impressive debut. I was at the edge of my
seat waiting to see what would happen next! Bottom line, this was
unputdownable!!!' --- YA Fantasy Guide ---

'How exciting that we live in a time when gay teen protagonists can be
just as screwed up as straight ones -- and their stories just as creepy!'
--- Brent Hartinger, award-winning author of Geography Club and Shadow
Walkers ---

Kelley was born and raised in central California, where she still resides with her lovely wife, daughter, and an abundance of pets. (Although she does fantasize about moving across the globe to Ireland.) She has a fascination with bells, adores all things furry – be them squeaky, barky or meow-y – is a lover of video games, manga and anime, and likes to pretend she’s a decent photographer. Her life goal is to find a real unicorn. Or maybe a mermaid.

Within young adult, she enjoys writing and reading a variety of genres from contemporary with a unique twist, psychological thrillers, paranormal/urban fantasy and horror. She loves stories where character development takes center stage.


Archer - I know Viv is your best friend, but murder? How were you okay with that...
It would scare me to death!
Archer: You do what you have to do. I don't expect anyone to understand.

Archer - What does it feel like holding a gun?
Archer: Maybe, at some point, it felt like holding the power to change something big. But now I don't think it feels like anything.

Archer - Did you ever think you'd fall for someone like Evan?
Archer: I didn't think I'd fall for much of anyone, no, especially someone like him. He's just...different.

Evan - Swimming... Outside... In the cold weather... Are you secretly a merman?!
Evan: I think the word you’re looking for is ‘rebel.' But, really, it seems more bad-ass than it actually is. After the initial shock, you get used to the water pretty quickly.

Evan - You seem like one of the greatest guys in the world. What drew you to Archer?
I mean he was so reserved.
Evan: I think the fact that I always steal the last of the pie rules me out in the ‘greatest guys of the world’ competition, but I digress. I’m the sort of guy who tends to look deeper than the surface. I like interesting people and I think you’ll find that the quieter someone is, the more interesting they really are. … Besides, he was pretty. I also like pretty.

Evan and Archer - Anything I haven't asked you'd like tell us about? Anything at
all... Even if it's about whales?!
Evan: Whales like to swim. And they eat a lot. Which means you could be wrong in your theory about me being a merman. I might be a whale.
Archer: He's definitely a whale.

I loved this twisted book more than I think I should have. Hushed is thrilling, disturbing, and insanely amazing.

I was surprised, yet completely happy with the ending of Hushed. For Kelley to take a topic of love and being blinded and twist it as far as she did, it's almost frightening. And that's exactly why I loved this book as much as I did. It's 100% intense the whole way through and it's beautiful.

Thanks for stopping by!! And don't forget to check out all the other stops on the tour! :)
Posted by Jena at 12:00 AM