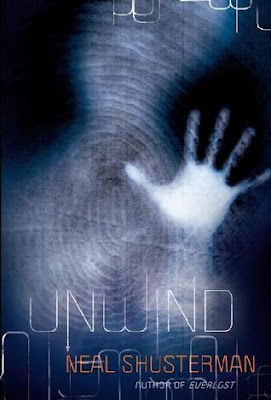 Synopsis: Connor, Risa, and Lev are running for their lives.

The Second Civil War was fought over reproductive rights. The chilling resolution: Life is inviolable from the moment of conception until age thirteen. Between the ages of thirteen and eighteen, however, parents can have their child "unwound," whereby all of the child's organs are transplanted into different donors, so life doesn't technically end. Connor is too difficult for his parents to control. Risa, a ward of the state is not enough to be kept alive. And Lev is a tithe, a child conceived and raised to be unwound. Together, they may have a chance to escape and to survive.

Unwind is told from the prospective of many characters, but the story revolves around Connor, Risa, and Lev. Connor gets in fights, was outspoken, and well wasn't supposed to know he was getting unwound. Risa, is in a state ward. She plays piano and is pretty intelligent, but she has reached her potential, and her only option now is to be unwound. Lev is a tithe. He knows he's being unwound and is happy about it... he believe it's his purpose. By some fate, these three meet and have escaped being unwound. But, for how long? Is trying to survive, almost being killed better than having yourself torn in pieces bit by bit?

Could you imagine living in a word where your parents/guardians could sign a form to have you unwound? Unwinding is almost like organ donating, except being unwound means they use every piece of you. They take you apart bit by bit and you have no choice in the matter. Unless you are disabled or over 18, your parents can sign you away like it's nothing. All choice in the matter is completely taken away... how would you want to live in a world like that?

There's a huge question that is constantly brought up in Unwind. Would you rather be unwound knowing that every part of you is still alive and in use in someone else? Or would you rather be dead? It's such a tough question. Also, keep in mind that Unwinding only happens in seventeen and under kids! We get a first hand look with Cyrus of how you would "live on" and I've got to say it's scary, almost schizophrenic-like. I think personally, I'd choose death. At least killing myself would be my own choice.

I truly loved Connor and Risa's characters in this story. They are both so strong, and smart. I loved watching them grow, and change. In the beginning of Unwind they are completely different characters than they are at the end. That is something I completely admire. Chapter 58 I loved - just had to throw that out there! :). Then, there is Lev. In the beginning I must admit, I thought Lev was a complete twat and I would have dropped his ass so fast. But, by the end of the book I ended up growing to really like him. He finally found his place and what was meant for him and I believe he made the right decisions.

One last character I must mention is Roland. If you've read this book or plan on it... Chapters 59-61 killed me. They revolve around Roland and even though his character is an ass, I would never wish this on anyone. I seriously cringed the whole way through them. I could NEVER imagine being unwound. It's those chapters right there that hit you in the gut and turn this book from great to unbelievable.

Unwind is an unforgettable, and thrilling story.  I don't know where Neal Shusterman came up with it, and I'm not sure I want to know. But he created one hell of a story that is definitely worth reading.


*Special thanks to Lauren over at Ravishing Reads for letting me borrow this! :)