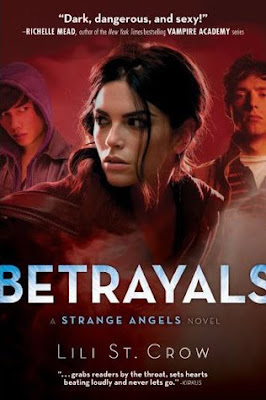 Synopsis: She’s no angel . . .
Poor Dru Anderson. Her parents are long gone, her best friend is a werewolf, and she’s just learned that the blood flowing through her veins isn’t entirely human. (So what else is new?)

Now Dru is stuck at a secret New England School for other teens like her, and there’s a big problem— she’s the only girl in the place. A school full of cute boys wouldn’t be so bad, but Dru’s killer instinct says that one of them wants her dead. And with all eyes on her, discovering a traitor within the Order could mean a lot more than social suicide. . .

Can Dru survive long enough to find out who has betrayed her trust—and maybe even her heart?

Thoughts: The quick paced danger doesn't stop in this sequel to Strange Angels. Dru is still a kick-ass chick and fighting for her life.

We start off right where we left off in Strange Angels. Dru has been taking to a Schola in hopes of being kept safe, but she has a new mission which is to help Christophe figure out who is Betraying the Order. The school is refusing to teach or train her, and she feels as if everyone, but Graves, could be lying to her. In a school filled with Wulfen and Djamphir, the danger has only just begun for Dru.

In this second installment, Dru is in constant shuggle with a few things. She's unsure who to trust, she hates seeing the Wulfen treated like low-class, she's starting to feel the effects of being svetocha, and she's starting to feel her heart being pulled in two directions. Dru is constantly faced with danger and it never let's up in Betrayals.

The boys are back in full as well. With new additions :)! Christophe is still the blue-eyed savior and protector, while Graves is still Dru's safe spot and her best friend. Also she's gets a gang of Wulfen, whom I love! I really liked shanks and dibs. I thought their characters were fabulous additions to the series! I also really like Ash, can't wait to read more about him.

I'm so happy the romance is finally starting to pick up. Not that the book needs it, believe me the action will keep your eyes glued to the page. But, I'm a girl that likes some smut and finally in Betrayals, Dru is starting to struggle with her heart and her two boys.

Overall good book, and now I'll be moving onto Jealously!
Posted by Jena at 3:17 PM