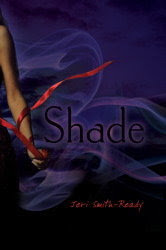 Synopsis: Love ties them together. Death can't tear them apart.

Best. Birthday. Ever. At least, it was supposed to be. With Logan's band playing a critical gig and Aura's plans for an intimate after-party, Aura knows it will be the most memorable night of her boyfriend's life. She never thought it would be his last.
Logan's sudden death leaves Aura devastated. He's gone.

Like everyone born after the Shift, Aura can see and hear ghosts. This mysterious ability has always been annoying, and Aura had wanted nothing more than to figure out why the Shift happened so she can undo it. But not with Logan's violet-hued spirit still hanging around. Because dead Logan is almost as real as ever. Almost.

It doesn't help that Aura's new friend Zachary is so understanding—and so very alive. His support means more to Aura than she cares to admit.

As Aura's relationships with the dead and the living grow ever complicated, so do her feelings for Logan and Zachary. Each holds a piece of Aura's heart...and clues to the secret of the Shift.

Thoughts: Wow. Just wow! Shade is a whirlwind of emotions in one book. Love. Is all I can say.

Shade starts off with Aura, who since the shift can see ghosts. Aura is special though, she was first. That doesn't stop her life though, or her love for her amazing, sexy, singer boyfriend Logan. So when Logan tragically dies she's thinks it's all over, until she realizes that Logan is still with her in ghost form. As more mysteries unravel, she becomes close to Zachary, a green eyed, Scottish cutie. Together they begin to figure out what the Shift is all about. What do you do when you're in love with your ghost boyfriend, but someone else is willing to be there for you?

I loved this book. The story was fantastic. And I really, really want to know more about the Shift and Aura's mother. Another aspect I loved about this book was the music. I adore music. It's one of my favorite things in the world. There always seems to be a lyric for every situation and every emotion. The fact that Logan sang, and played guitar killed me. I wanted to jump right on him haha! And Zachary's song was I Will Posses Your Heart? Hellloooo amazing.

I loved every character in this book. Well with the exception of Brian, Becca, and Nadine. I loved the Keeley brothers and Megan! Aura was something else. I really ached with her. I know what it's like to love someone and also have someone in the background saying 'hey! I'm here for you. I'll catch you when you fall.' It's the worst decision in the world. One to this day, I haven't made. And honestly my heart aches for Aura for having to chose between two amazing guys.

As of right now... I adore both boys. Zachary is such a sweety and he has green eyes, which is a killer for me. Green eyes are my favorite! He's so willing to do anything for Aura and be there for her when she needs him. But, I am a tiny bit more a Logan girl!!

This book is so much more than romance. It dives into drugs, parties, music, school, how cruel people can really be, and how much people will do for love. I'm really rooting that somehow Logan and Aura end up together. I just don't see how it will happen though. Here's hoping! :) If not, Zachary is still a keeper and I adore him too!

This book was amazing! Definitely worth a buy!! I cannot wait for the sequel I neeeeeeed more!!!

Most importantly... Always fight for what you want and don't give up. Believe in music. Believe in yourself. Believe in love. Always.
Posted by Jena at 10:39 AM