Outside In by: Maria V. Synder 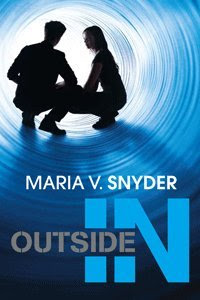 Synopsis: Me? A Leader? Okay, I did prove that there's more to Inside than we knew. That a whole world exists beyond this cube we live in. And finding that led to a major rebellion - between worker scrubs like me and the snobby uppers who rule our world. Make that ruled. Because of me, we're free. I thought that meant I was off the hook, and could go off on my own again - while still touching base with Riley, of course. He's the one upper I think I can trust. But then we learned that there's outside and then there is Outside. And something from Outside wants In.

Thoughts: An intense, fast-paced stunner! Literally. I absolutely adored the first book Inside Out and the second did not disappoint me at all! The second picks up right where we left off from Inside Out. The uppers and lowers still struggling to get along and Trella seems to be in the middle
Of the tangle yet again. When a new issue presents itself will Trella step up again and save the day?

I adored this book! I love love love dysotopian/scifi ish books like this and it was awesome! Trella is one strong, small chick and I love her for it! I found myself really liking Lamont in this one! Surprising huh? Yeah. Anywho.. A new character I really liked was Bubba Boom. He played a vital role in Outside In and I really liked him. And of course there's the oldies - Logan is awesome :) and Riley. Oh Riley <3 I love you. How can you not?!

Overall I loved the second in this series! It was fabulous and I really hope there's a third :)